You are now playing »
/ 419
ThunderCats Reels of Thundera Toggle Lights 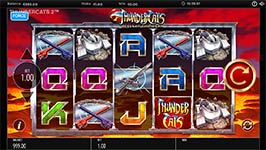 Get ready to claw your way into the win column with ThunderCats Reels of Thundera slot machine by Blueprint Gaming, based on the ’80s animated super-action franchise ThunderCats! This fantastic new game adds new action to your game portfolio, bringing all of your favorite characters like Lion-O and Mumm-Ra to life again. Spin across 5 reels with 20 paylines in a game brimming with action packed features, bringing the feel of the show to your fingertips. Can you defeat the Ancient Spirits of Evil and walk away with up to 10,000x total bet?

Wild Symbol – The Wild(s) symbol can be used to help form line wins by substituting for other symbols. The Wild(s) symbol substitute for all symbols except scatter symbols or bonus symbols. Only the highest paying win on each line is paid (for example 3 wild symbols being a win or those symbols being used with another symbol to make a win of 4 symbols will only pay which of those two is the highest). Wild symbols include: Lion-O Wild, Cheetara Wild, Panthro Wild, Tygra Wild and Wily Twins Wild.

ThunderCats Modifiers – Thundercats Modifiers can be triggered randomly during any spin: Lion-O applies wilds to the reels, greatly improving the chance of a winning combination. Tygra swipes the reels with a chance to turn them Wild, any win will retrigger the modifier. Panthro will strike the reels linking them together to deliver the same symbols. This has a chance to link between 2 to 5 reels. Cheetara dashes over the reels and shuffles all symbols on screen to new positions. This can retrigger up to 5 times. Wily Kit and Wily Kat will apply Mystery Symbols onto the reels, all in view when the reels land will transform into the same symbol. Snarf will apply bonus symbols to the reels, greatly improving the chance of a bonus activation.

Bonus Activation – 3 or more Bonus Scatter symbols anywhere on the reels awards a Bonus. You will spin the bonus wheel, which will eventually stop on 1 of 6 features, the bonus it lands on will be been awarded.

Sight Beyond Sight – Triggered by landing on the Sight Beyond Sight segment during the Bonus. Pick an Eye of Thundera to reveal 1 of 4 outcomes: Lion-O (Increases the Cash Multiplier); Thundercats Logo (upgrades the Cash Multiplier values); Mumm-Ra (ends the feature); Thundertank (takes the player to another bonus). If the Thundertank is revealed 3 times then the player can trigger any 1 of the 5 other Bonuses.

Hear the Roar: Free Spins – Triggered by landing on the Hear The Roar Free Spins segment during the Bonus. During any spin, if a Special Lion-O symbol lands in view it will upgrade one of the other symbols, indicated by the image next to the reels. This can occur up to 4 times. At the end of Free Spins the player has a chance to win additional Free Spins. Picking an Eye of Thundera will reveal either COLLECT (ends feature) or FREE SPINS (awards extra spins). If the player reveals FREE SPINS then they are awarded up to 5 extra spins.

ThunderCats Hooo! Free Spins – Triggered by landing on the Thundercats Hooo! Free Spins segment during the Bonus. During any spin, any Wild that lands in view will be held in place until the end of the feature. Filling a whole reel with Wilds will award 5 additional Free Spins.

Ancient Spirits of Evil – Triggered by collecting 5 Bonus symbols, gambling to, or having landed on the Ancient Spirits of Evil segment during the Bonus. The player selects from emblems to reveal 1 of 5 outcomes. Lion-O (Spins the Wheel); Thundercats Logo (Moves the player to the next ring); Mumm-Ra (ends the feature); Red Arrow (adds more Red Arrows to the wheel); Upgrade (increases values on the Wheel). Landing on a Cash Value will replace that section of the Wheel with a Red Arrow. Landing on a Red Arrow will move the player to the next ring. Reaching the centre of the Wheel will award Ultimate Thunder Bonus.

Ultimate Thunder Bonus – All winnings from Ancient Spirits of Evil will be transferred to Ultimate Thunder. Pick one of the Thundercats to reveal a multiplier which will be applied to your winnings.