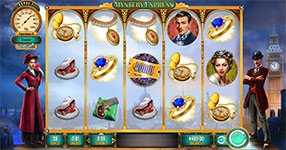 All aboard! Pack your bags for a train journey of intrigue in Mystery Express online slot from IGT! Accompany the mysterious Christopher and Isabella through the capital cities of Europe as you unlock new levels and locations with the popular Level Up Plus feature. Watch for the golden locomotive that precedes the Mystery Wilds feature in the base game – it can trigger on any spin and turn 1 to 5 reels wild! Trigger the Bon Voyage Bonus and roll the dice up to 50 times to progress along the map to new locations and bigger awards.

Bon Voyage Bonus – Trigger the Bon Voyage Bonus when three Bonus scatter symbols appear anywhere on the first, third and fifth reel. If there is a Bonus symbol on the first and third reel and no win, there is a second chance for the Bonus symbol to appear on the fifth reel and trigger Bon Voyage Bonus. Pick one of the three Bonus symbols to reveal the initial number of dice rolls: two, three, or four. Depending on the level reached, the journey could start from London, Paris, Venice or Istanbul. Press the ROLL button to roll the dice and move the train around the map.

Different bonus features are awarded around the map.

The Bon Voyage Bonus is limited to 50 dice rolls.