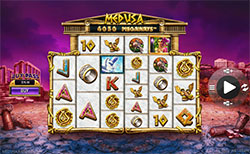 Prepare to be tempted by the gorgeous gorgon’s hypnotic gaze in the exciting Medusa Megaways slot machine from NextGen Gaming. This seductive new release offers the Megaways mechanic under license from Big Time Gaming which can offer up to 117,649 ways to win across the game’s 6-reels. Let Medusa tempt you into spins where you can trigger one of the game’s rewarding features like wilds, free games, Extra Reel and Snake Strike Feature.

Extra Reel – The extra reel adds a symbol position to each reel it appears above from reels 2 to 5. Symbols appearing on the extra reel are determined independently of the main reel array. Any symbol can appear on the extra reel during bought games except the scatter and soldier.

Medusa Wild – The Medusa is the wild symbol and substitutes for all symbols except the scatter and solider symbols to complete possible wins.

Soldier Extra Reel Feature – The Soldier can appear on the extra reel during free games only and when it does, it will upgrade to either a wild or scatter symbol.

Reactions – A reaction is triggered whenever one or more winning combinations occur. After all applicable wins have been paid, every symbol appearing in a winning combination is removed from its respective reel and any remaining symbols cascade downward to create new possible wins.

Unlimited Win Multiplier – Win multiplier starts at x2 and increases by 1 before each reaction. The win multiplier will remain at its current value at the commencement of the next free game round.