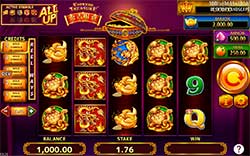 Endless rewards await with a few lucky spins in the incredible Jin Ji Bao Xi: Endless Treasure slot machine from SHFL! This entertaining new game gives you the chance to win up to 15,499x your total bet plus one of four generously sized jackpot prizes. This all wins pay game is packed with features including a Fu Value feature, Golden Chance with Wilds, Free Games, Top Up Feature and Jin Ji Bao Xi feature!

Symbols per Play – Choose how many gold symbols to play. During each base game play the above symbols will appear, in addition to the game’s standard symbols. The gold symbols played are displayed at the top left corner of the screen.

Fu Value – In each standard game, a Fu Value is given to the BONUS symbol, which is randomly chosen from a range of available Fu Values. The chosen Fu Value is then multiplied by the bet per spin. This value appears on each BONUS. The number of gold symbols played determines the eligibility of the Fu Value. Fu Values are shown as cash values and you can learn more about them in the paytable.

Free Games Feature – 6 Free Games are triggered when a Free Game option is selected from the Feature Selector. Select one of the Free Games options presented to start the feature. Each option includes a set number of a gold symbol. If picked, this number of symbols will be added to the reels for the Free Games.

Top Up Feature – Select the Top Up Feature from the Feature Selector. To begin the feature, 6 spins are awarded. BONUS remains locked in place during the Top Up Feature and will contribute to wins. During each spin, any YELLOW COIN or GREEN COIN that appears will be held for the remaining spins.