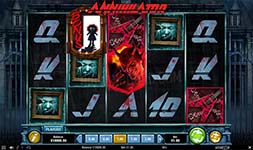 The legendary Jeff Waters leads the charge across 10-lines in the new Annihilator slot online by Play’n GO. Canada’s head-banging thrash metal band is ready to rock the reels with big bonus features and thumping music! Annihilator features several of the group’s quintessential hits including a track from their latest album Ballistic, Sadistic as well as Waters himself, appearing as an animated Wild, shredding on his iconic guitar and setting the reels on fire. The game also has several exciting features named for some of their most famous albums and tracks, Fun Palace, Set the World on Fire and In Command.

In Command Feature – The ‘In Command’ feature is randomly triggered in the base game. If triggered, any Wild symbol that appears on the reels will expand to fully occupy the respective reel(s), substituting for all symbols except Scatter and Bonus. If the spin yields no win and/or feature trigger, one re-spin is awarded. Previously expanded Wild symbols remain in place, and the other available reels will spin to provide new symbols. Additional re-spins are awarded until a winning combination and/or feature trigger is awarded. The feature is not active during Free Spins.

Before each Free Spin, the expanded Wild moves sideways (left or right) a random number of reels. The movement will highlight symbols, by creating a trail of fire. The trail of fire can either be 1 or 3 symbols in height. A Wild symbol landing on a highlighted symbol transforms the entire trail of fire into additional Wild symbols.

During Free Spins, each Scatter symbol awards 2 additional Free Spins – up to a maximum of 50 Free Spin